Success! Please check your email to confirm your subscription. Welcome to the fun!

A simple combination of dates and cashews, this chunky cashew spread is delicious on toast, waffles, French toast…you name it!

Before we dive into the dramatic story involving this cashew spread, I’d just like to give a heads up that there won’t be an Ingredient of the Week this week. I know, sad week. But it’s because it was a happy week! Three of my favorite people came to town and I just wasn’t about to spend that time blogging.

But I did make this tasty nut butter spread of sorts before they arrived, and well, it was never meant to be a nut butter. I’d aimed to make a smooth vegan caramel to go on the Chocolate Mousse Pie, so I conjured up a recipe involving pureed cashews and dates. But when I opened the food processor, I was met not with caramel but with this crunchy, thick, butter stuff. Angrily, I threw it in a jar and forgot about it.

That is until I woke up the next morning and was searching my fridge for something to top my toast. My eyes landed on the shunned nut spread and I realized I’d been trying to make the poor nut spread into something it was not. It was never meant to be a smooth and sultry caramel sauce, but rather a voluminous toast-topper!

Basically I just threw cashews and dates into the food processor and blended until as smooth as possible, then added coconut oil and cashew milk and a few other flavor boosters.

This created a thick spread, so I did some research into how you might achieve a smoother sauce.

Following these tips will make for a smoother spread. But the recipe below is for the chunky tasty accident. 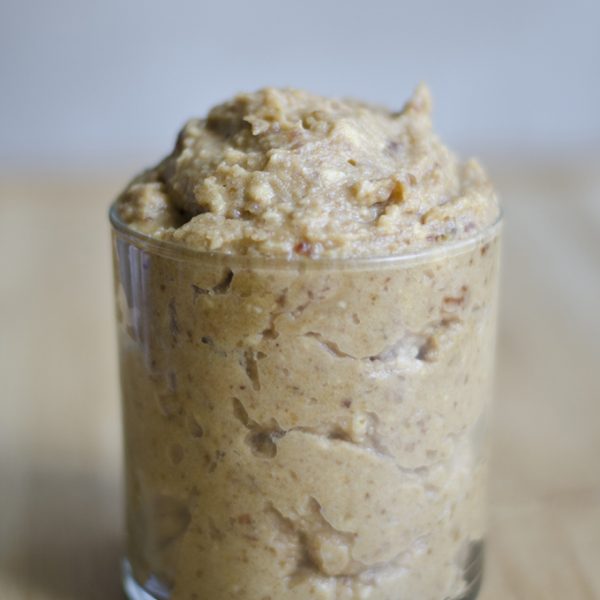 For a smoother nut butter, soak cashews for 5 hours, soak dates in hot water for 20 minutes, and puree cashews and dates separately before adding in additional ingredients.

Serving: 1serving (2 Tbsp) | Calories: 97kcal | Carbohydrates: 11g | Protein: 2g | Fat: 6g | Sodium: 62mg
Hungry for more?
Join our Eatmail newsletter for weekly new recipes and a complimentary copy of our vegetarian dinners cookbook!
This post may contain affiliate links to Amazon or other partners; your purchases via these links may benefit Live Eat Learn. Read more about our affiliate linking.

Showing you how to make easy vegetarian recipes, one ingredient at a time.  Read more

Showing you how to make easy vegetarian recipes, one ingredient at a time.
Read more