Success! Please check your email to confirm your subscription. Welcome to the fun! 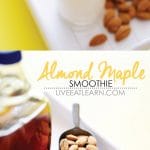 Nutty almonds and maple syrup meet creamy Greek yogurt and frozen banana to create a heavenly Almond Smoothie you won’t be able to get enough of.

Happy Tuesday, friends! This is always the slumpiest day of the week for me, especially now that I have a real person routine and can’t just cook up recipes for you in my pajamas all day. But this Tuesday is different, because this Almond Maple Smoothie is, well, magical.

It all started with the tulip-man’s obsession with maple syrup. The tulip-man, my European boyfriend who’s unaccustomed to our American foods, was addicted to good ole North American maple syrup from the moment he first tasted it, so we’ve acquired quite a stockpile in our house (you know, in preparation for the maple syrup apocalypse).

And as I was staring into the fridge blankly, as I so often do when I’m blanking on a good recipe idea, it dawned on me. Almonds + maple syrup! I quickly threw some almonds, maple syrup, yogurt, and a frozen banana in the blender, blitzed it all up, and tasted.

Holy guacamole, you guys, this smoothie is GOOD. It’s not in-your-face flavor, but rather, subtle hints of sweetness and creaminess and just darned goodness. 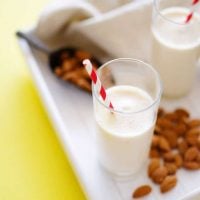 I first published this recipe on Amanda’s Cookin’.

Showing you how to make easy vegetarian recipes, one ingredient at a time.  Read more

Showing you how to make easy vegetarian recipes, one ingredient at a time.
Read more