END_OF_DOCUMENT_TOKEN_TO_BE_REPLACED

These Dutch Pear Tarts, or “Perensloffen” are a simple and delicious combo of lemon-y almond paste, pastry dough, and fresh pears. Perfect for breakfast, brunch, or dessert!

Guess what? ********drumroll******** I’m moving to the Netherlands! This winter I’ll be crossing the pond from Texas to the land of cheese, tulips, and tall people! So when my very own boyfriend-tulip-man came to visit this week, aside from working through the monotonous resident’s permit application, we conjured up these bad boys. Appelslof is (apparently) a traditional Dutch pastry, but with it being pear week and all, we tried swapping in some pears to make simple, way-delicious pear tarts (or in Dutch, Perensloffen)!

It was both of our first times making anything like this…delicate homemade pastry dough, almond paste, choosing the right pears…so much could have gone wrong! But it didn’t. It was perfect! I mean, not including spilling all the almonds everywhere, a few guestimated conversions of metric to ‘merican, and a semi-heated debate over the amount of stirring that should go into a pastry dough. All aside. It was perfect.

And the pastries were perfect too. They’ve got three main components:

The puff pastry dough: This is essentially just equal parts flour and butter (by weight…ugh rest of world y u no use cups?! Guess I better get used to it), with some salt and water. Cut this all together until just blended (though we mixed this quite a bit and it was still flaky and delicious). The sneaky step here is in the rolling. By rolling out the dough real thin, folding it up, then rolling it again (over and over and over), you created (tens of hundreds of thousands of) exponentially thin layers that will puff up when cooked.

The almond paste: So boyfriend made this while I was work, which meant I couldn’t get it in front of my camera for the whole making-it-process. I made it again and posted the recipe here, because this will very likely become a new obsession of mine, and therefore I’m going to be needing more anywho. It’s pretty much just almonds, sugar, lemon, and egg.

The pears: We used Bosc pears, which hold up well in baking. Toss them in a lemon juice, honey, cinnamon mix and you’re all set.

Oh hai. Just cutting some pears on the floor a.k.a. at my studio. 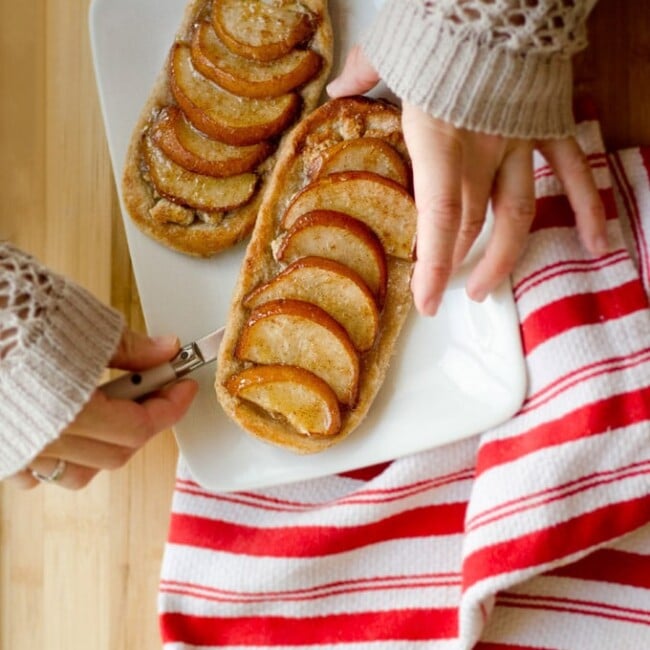