END_OF_DOCUMENT_TOKEN_TO_BE_REPLACED

These Sweet Potato Cinnamon Rolls are made with whole wheat flour and mashed sweet potatoes, packing in the nutrients while keeping the same decadently delicious cinnamon roll taste!

Today is the day! I’ve been in Germany for a few days now…eating flammkuchen, drinking glühwein, experiencing the epitome of Christmas spirit at the German Christmas markets, hugging my cat Louie…but today is the day I take the train up to my new home in Holland where my boyfriend-tulip-man awaits!

So to prep you for the large amount of Holland talk I’m bound to sling at you over the next few months as I explore and settle into this new country, I’m just going to clear your potential confusion about this little cheesy, tulip-y land.

And in addition to containing the works, these are really forgiving. Forget to add the egg until the very end (like me)? Throw it in anyways. Don’t have a rolling pin (still) and need to use a Nalgene bottle like you did that one other time? That’s okay, they forgive you. Think you’ve ruined everything and will never succeed as a cinnamon roll sensei? Well persist, young grasshopper! You can do this!

Just don’t squeeze them into the pan quite as much as I did…these puppies really want to expand and get all puffy; give ’em room to do so. 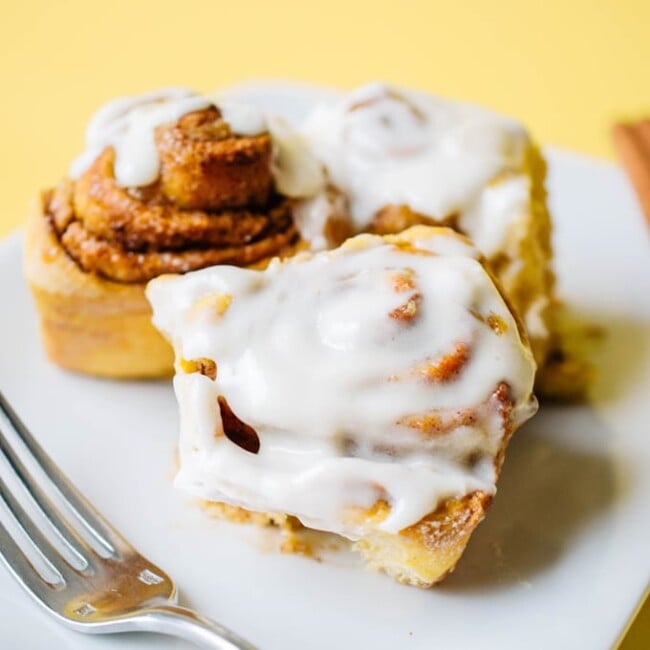 *We’re not going to get really specific with sizes here. It’s too early in the morning and you want your cinnamon rolls now! These things are forgiving, and exact sizes won’t really affect how delicious your cinnamon rolls will turn out. Rule of thumb: Roll your dough thinner = more surface area for brown sugar/cinnamon filling, more layers. Roll your dough thicker = Less sugar, less layers. You can guess which I tend towards… **I crowded mine in the pan too much. Don’t do that. They’ll expand quite a bit!