END_OF_DOCUMENT_TOKEN_TO_BE_REPLACED

It seems that today there’s a different aisle for every different diet in the grocery store.  But what does it all mean?  Here is my understanding of a few diets of today, as well as my take on them.

Gluten is the protein responsible for the chewiness in bread and is found in wheat, barley, and rye.  Celiac Disease is a serious autoimmune (self-attacking) disorder occurring in approximately 1% of the population.  When a person with Celiac’s eats something with gluten, their body attacks its own small intestines, causing damage to their gastrointestinal tract and some serious stomach upset.  For a person with Celiac Disease, even a crumb of toast can cause a full blown reaction.  Another 0.5% of the population has a gluten allergy, which is just like other food allergies.  The body doesn’t have an autoimmune reaction, but rather an allergic reaction.

The percent of the population that cared about gluten went from 1.5% to way-too-high% when cardiologist Willam Davis published his book, “Wheat Belly”.  Since then, food manufacturers have realized the commercial potential of gluten-free products and “gluten-free” has flooded grocery store shelves.

There is currently no evidence suggesting a gluten-free diet would be beneficial to those without gluten-allergies or Celiac Disease.  But the way I see it, if going gluten-free will encourage less processed carbs and more fruits and vegetables, then go for it.

The Raw Food Diet says, “Heck with all this, we’re not cooking anything!”  But there are some cases where cooking food is actually better.  Most meats, particularly chicken and ground beef, should only be consumed cooked to prevent Salmonella and E. coli, respectively.  But aside from the obvious, some foods are more nutritious when cooked.

As with all things, there is no black & white answer when it comes to whether raw food is better.  Clearly some foods benefit from the cooking process, while other are best when eaten straight from the tree.  So when you’re cooking most produce-y things, remember: cook in as little water/oil as possible, as short of time as possible, and remove from heat when it’s as colorful as possible.

This is probably less a fad diet and more a lifestyle, as the motives behind these diets typically vary further than simple weight loss.  Nevertheless, here are some of the variations of vegetarianism common today.

Contrary to popular belief, it isn’t all that difficult to get enough protein as a vegetarian.  Vitamin B12, however, is only found in animal products and thus may need to be supplemented.

AKA the Paleolithic Diet, Caveman Diet, Stone Age Diet, Hunter-Gatherer Diet, this diet is based on what our distant, way-back-when, long-time-ago human ancestors may have eaten.  The Paleolithic Era began about 2.5 million years ago with the development of primitive tools, and ended 10,000 years ago with the advent of agriculture (when we realized that we really like grains, beans, and dairy).  Paleo patrons argue that the human diet has changed dramatically in these past 10,000 years, and that human anatomy hasn’t had time to catch up to its evolutionary foundation in this relatively short amount of time.  For this reason, the Paleo Diet includes only foods humans would have had access to way back when: meats, vegetables, fruits etc.  It excludes grains, dairy, refined sugars, salt, many oils, and legumes (beans).

Following a strict Paleo Diet certainly has benefits, including increased fruit and vegetable consumption, reduction in processed foods and refined sugars, and likely weight loss due to reduction in what you can eat.  Those thinking about going Paleo should take extra steps to ensure adequate calcium (no dairy), B vitamins, like thiamin, riboflavin, niacin and folate (no grains), and carbohydrates for energy (no grains or sugar, quick forms of glucose).

The Low-Carb Diet is probably the most transcending diet of all time, and that’s because it works.  No, my nutritionist self is not saying that diets work (because in the long run, they don’t), but a diet that restricts carbohydrates will lead to weight loss.  Here’s the basics.

When it comes to carbohydrate restriction, not all calories are created equal.  Your body actually really prefers to use glucose for energy, and we can only get this in carbohydrates like fruits and grains.  When you stop eating carbohydrates, your body will use the stores of glucose it has, called glycogen, until it runs out (2 to 3 days).  It then switches to a process called ketosis, which is a way of using fat for energy in the absence of glucose.

This ketogenic state, though its fat-burning potential may sound like the perfect plan, is pretty hard to keep up.  It requires you to eat 10-20% of your calories from carbohydrates (down from the recommended 65%), with about 55-65% coming from fats.  This often makes people feel tired, groggy, and down-right cranky.

The Academy of Nutrition and Dietetics looked at 14 studies examining the effectiveness of the low-carb diet.  They found that low-carb diets were more effective over the first 6 months than simple calorie restriction diets.  Unfortunately, after 1 year the difference was no longer significant, once again alluding to our love for carbs.

Genetically Modified Organisms, or GMOs, are the topic for hot debate now a days.  Essentially, things are added or removed from the DNA of the product (the plant usually) to make it “better” in some way.  This could be that it is made more resistant to pests, has higher nutritional value, or produces more of the edible product.

As with all things, this requires a balance.  Take for example the wheat we eat today.  In trying to produce more of the edible wheat head, developers negated to improve the stalk.  The result?  Wheat with a big, fat head and a weak, crumpled stalk that couldn’t support it.  Which of course led to the genetic modification to breed thicker stalks.

But is this necessarily bad?  Well it depends entirely on what genetic modifications are being made.  In the case of wheat, it is being modified to produce more.  It is my personal guesstimate that humans are eating far, far more grains than we ever did during the evolution of our digestive system, and consequently the high amounts of grains we consume today may be causing some troubles.  GMO’s, therefore, are not necessarily the problem in this case.  It is our never-ceasing demand for grains.

Another example.  Potatoes were one of the first genetically modified crops.  The modification led to the potato being resistant to the Colorado Potato Beetle, which meant farmers could stop pouring massive amounts of insecticides into the fields.  Due to public demand and anti-GMO campaigning, however, these potatoes were taken from the shelves after just 5 years.  So which is better in this case?  GMO or pesticides?

The topic of GMOs is a Pandora’s Box, and there is still insufficient evidence to say whether or not this practice is actually bad.  At present, I wouldn’t suggest going and spending a fortune for the sake of having all non-GMO products.  If you do have that fortune to spend, my suggestion would be to go organic.

Organic food is free from synthetic pesticides, fertilizers, additives or solvents, and usually promotes ecological balance.  Organic is NOT non-GMO, nor is it necessarily healthier or more nutritious, but it is quite nice for Mother Earth. Here’s the rundown.

Organic food promotes biodiversity of plants and animals and is much, much better for the environment.  It prevents topsoil erosion in farmlands, antibacterial resistance in animal products, chemical runoff when fertilizers and pesticides seep into grounds and rivers, and a whole palooza of things.  But is it healthy?

Organic foods are actually no more healthy than your everyday, synthetic pesticide-laden foods.  There has been little science to support the notion that organic foods have any different nutritional value than their non-organic counterparts.

So what are you to do?

Well I’m all about simplicity, in life and food.  This quote by Michael Pollan sums up my thoughts pretty well. 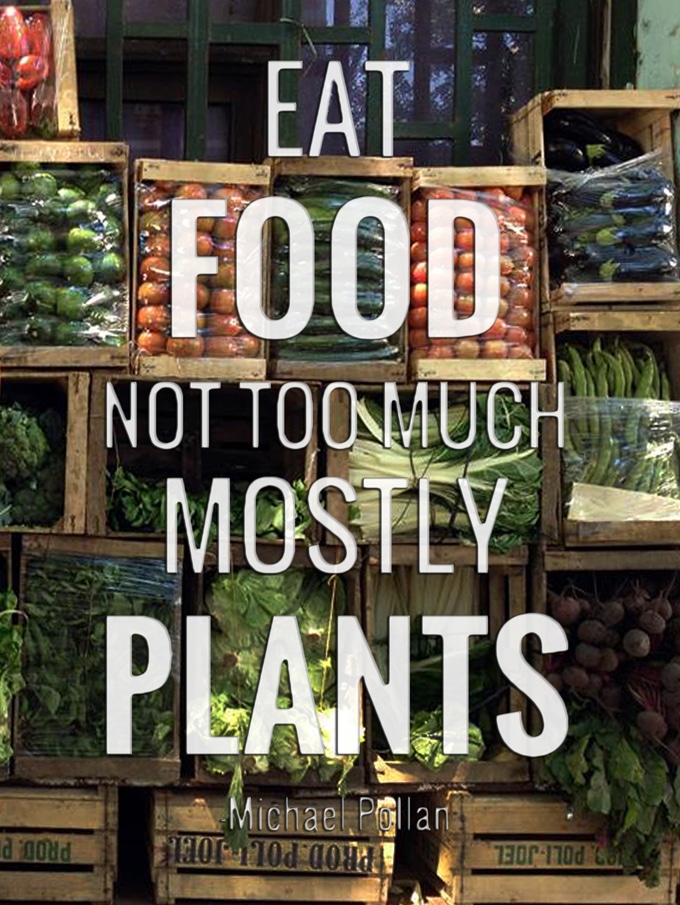